Despite the high wind forecasts there was a good turn out for the Celtic Coastal and Celtic Canter events, including a number of riders new to Audax.

Thanks to Will Hancock for this ride report.

And so to the end of a year of great riding, or rather I should say the start of another Audax season!  I got back cycling in 2014 following a running career curtailed by injury.  “ Get a bike Will, get a bike Will” said Cliff a work colleague and now fellow Audaxer, and after riding my first sportive (with Cliff) the Lands End 100 miler it was, “ride an Audax Will, the Dartmoor Devil is coming up….”  I was surprised to find that 100 km could be harder than 100 miles, especially when accompanied by all those steel bike riders, but liked the ethos and connoisseur feel of the Audax scene.

2015 saw me riding a mix of sportives and Audax.  I remember finishing one unnamed sportive to loud music and an overly enthusiastic PA commentary and thinking “what am I doing.”  As the kids would say “man you’ve changed.”  Whilst out riding with fellow Lanhydrock Wheelers I extolled the virtues of Audax, a somewhat obscure cycling sub-culture.  The story often met with bemusement especially when I explained that the conclusion of many events saw a lone trip to the ATM to prove completion before driving home.  Quite the opposite to the razzmataz of the commercial events. 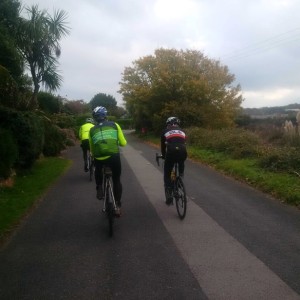 Early days on the scenic and quiet road through Lelant

With this in mind it was heartening to see several clubmates turn out for this year’s Celtic Coastal.  This was in spite of a warning of strong easterly winds.  Great to pop into the hall for a pre ride cup of tea and catch up with familiar faces.  Then we were off!  I’d forgotten just how harsh that section of tarmac between Gwithian and Hayle is.  Recent excursions on fat tyres (MTB and CX) had turned me into a softie!  With the strengthening easterly at our backs we were quickly into Lelant.  Here the connoisseur nature of the event revealed itself as we began the climb to the Penwith Moors on quiet lanes.  Many around me seemed to be enjoying this, contrasting it to the main road nature of the Lands End 100.  There was one slight navigational blip on this section, but following a short cyclocross section we were back on track!

Next followed the pièce de résistance of the Audax, the Penwith coastal section. Always a pleasure and never tiresome no matter how many times you have ridden it! It was especially enjoyable today with a strong easterly tailwind and the sense of space that good visibility brings, looking over the ancient field systems to the Atlantic. Our only impediment on this section was a mechanical so fiendish that it was on a par with the Indian rope trick, John’s chain trick! In seemingly no time at all we were into the excellent Apple Tree Café with over half the ride done.

Left: the fiendish mechanical, and Right: climbing on the coastal section 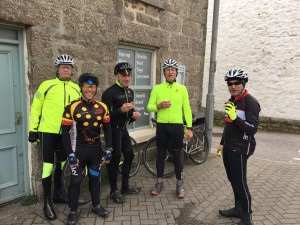 Enjoying the spoils of the Longrock Info Control

After sustenance replenishing our reserves with real food; beans on toast/egg, various cakes in the café it was on to the return leg.  This offered perhaps the most daunting section of the Audax, heading generally eastwards into the by now strong wind.  However we needn’t have worried as the route avoided the main roads, and wound its way eastwards via a combination of various sunken lanes.  Again the connoisseur nature of the route revealed its true nature, and made progress home easier than expected.  We all enjoyed exploring the hidden ancient villages encountered such as Sancreed.  In what seemed like a blink of the eye we were into Longrock and indulging in retail therapy to prove our passage through the final Information control. 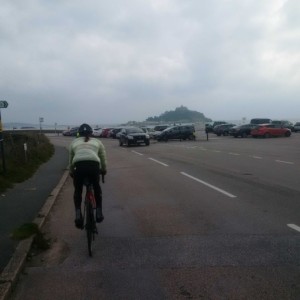 Deb heading into Marazion on the final section

With that we were on the final leg, the short bunny hop back to Hayle and thence to HQ at Connor Downs.  One of the highlights of this section was the traffic free circumnavigation of Copperhouse Pool, a real delight despite the easterly wind.  Journey’s end came at the WI Hall where Brevet cards were handed in for validation of another successful Audax.  We then basked in the realisation of a job well done over a slice (or two) of cake and multiple cups of tea.  On behalf of our combined squad of Lanhydrock, St Austell Wheelers and Camel Valley I would like to extend our thanks to the organising team and all the fellow riders who made it such a grand day out.  Well done too to those completing their first Audax and see you at the next one!