5:30 am alarm and a howling wind outside – what were we thinking of? Forecast wind speeds of 25 gusting 45mph are normally an automatic “not-on-the-tandem” decision, but somehow we were signed up together for the Mad March Excursion 100km event and ready to give it a go.

Our most recent tandem purchase of a Thorn Adventure with S&S couplings has opened up new Audax possibilities, so we drove up to Exeter and the Captain assembled the bike in the biting wind outside the Cranbrook Youth Centre. Excellent organisation by Sarah Britton with local Scouts handling advance entries and providing breakfast made signing in simple and speedy,  but alas no time for a cuppa before we set off, trailing the main departure.

We quickly left the urban sprawl and took to undulating Devon lanes heading South. The route took us briefly out of the shelter and across open heathland at Woodbury Common – a blasted landscape contrasting strongly with the more typical Devon scenes, and reminding us of the strength of the Westerly winds. A fast descent and a sharp left turn took us back into lanes and pretty villages, and we made good speeds with some wind assistance to Otterton. We were able to pick up the answer to the info control on the fly, but stopped briefly in the village to write the answer into the Brevets, have a quick breather and chat with some other riders, and swap the route sheet to the next stage. One hour in, 20km down, and the sun still shining – this is fun!

The route then turned North along the Otter valley. We were a bit slower now with more hills and the wind less in our favour, but the route was fairly sheltered and the main excitement was hearing the roaring in the higher trees we passed, and avoiding branches and small bushes in the road. We crossed the river several times on our way to Ottery St Mary, after which we gradually gained height. The hills became steeper and the wind more noticeable on the final push to the Uffculme pub control at 55km. We’d been pondering some hot food, but the pub had nothing to eat apart from a card of kids’ AHD snacks, so we had a warming coffee instead. As it was now midday we refuelled with a sandwich from the Coop next door to the pub and bananas we had thoughtfully brought with us.

The next stage of the route, East from Uffculme to Churchingford with the wind straight behind us, was short but totally exhilarating. The route instructions after Hemyock began “Continue up hill and along ridge for 7km”. This hill was probably the longest and steepest of the day, but the tailwind produced the uncanny impression of a helping hand on the back. When we reached the ridge we quickly racked up into our top gear and enjoyed the splendid long views and feeling of speed as we finally outran the wind on our way to the 70km control.

The York Inn at Churchingford was a complete contrast from The Ostler at Uffculme, very warm and busy with family Sunday lunchers. The Audax control team welcomed us with a mouthwatering choice of cakes and we took a moment to test out the offerings and discuss our plans. We were neither of us needing a hot meal now, so we settled on a pot of tea and a packet of crisps.

Returning to the cold outside world was a bit of a shock, and we now had the longest stage of the ride ahead, across some exposed ground in a broadly South West direction. Before too long we were crossing an old airfield with uninterrupted “views” to the North and West. This time the instruction “Continue for 7km” was not so benign. The Captain was glad of his choice of dirt drops for streamlining and control, while I tucked in as close as I could, closed my eyes and pedalled hard. Not much to see on an airfield anyway. 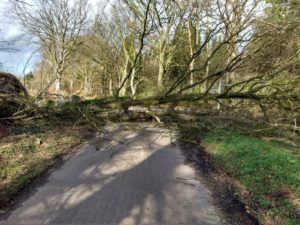 Things became a little quieter when we reached the shelter of some trees, and better still when we turned left and went from West to South facing, but shortly after this we were faced with a large fallen beech across out path. Luckily it was at a fork in the road where it was possible to walk around the tree, and we continued along an ever-narrowing ridge between trees until the steep descent of Hembury Fort Hill.

So far the weather had been mostly sunny, with only occasional drops of rain that had clearly come some horizontal distance on the wind, but now we saw dark clouds and falling rain in the distance on our route. Fortune apparently favours the brave, however, and wherever the rain went it wasn’t over us as we gradually lost overall height and regained the undulating lanes and pretty villages, crossing our outward-bound route at Colestacks. Surprisingly quickly we found ourselves on fast roads heading back to Cranbrook, this time to the final control at the Cranberry Farm pub.

Here we had warm welcome from Sarah Britton and her team, with more cakes on offer and a £1 discount at the bar. We happily basked in a warm feeling of (luck and) achievement to have completed the ride in the conditions. This is a lovely route and would be quite gentle in benign weather, but was still very enjoyable on a challenging day. Many thanks to Sarah and her team for organising it.

This entry was posted in Ride Reports and tagged Mad March. Bookmark the permalink.