Breakfast in Bampton, Singing in the Rain

One of the advantages of entering events online some weeks in advance is that we have committed to the ride before we see the weather forecast, making it much less likely we will get cold feet, though in the case of an Autumn ride this year rather more likely we will get wet ones.

Nevertheless, by the middle of last week the yellow warnings of rain and flooding had us wondering whether we were being audacious or simply insane to carry on with the plan to ride Sarah Britton’s 112 km event in what looked like a patch of heavy rain anchored firmly over the route. On the plus side winds were forecast light and it was unseasonably mild.

Eventually we’d dithered too long to cancel our budget hotel room (my price for doing a November event), committed further expenditure on a new pair of overshoes, and run out of possible minor ailments that might be brewing. So there we were on Saturday morning at Cranbrook Youth Centre, assembling the tandem in light drizzle with a forecast that was at least not as bad as some of the earlier predictions. We finalized our individual choices of wet weather gear, both deciding that winter tights were sufficient for the rain while riding, but playing safe with a pair of waterproof trousers on the carrier in case of deluges or p* fairy visitations.

There was a surprisingly large entry, including a group of Liskeard Velo riders who’d driven up from Cornwall, and several riders from further afield. There were even some entries on-the-line. We shared a few “we must be mad” exchanges, but everyone looked well-prepared and in good spirits, looking forward to some Type 2 fun. 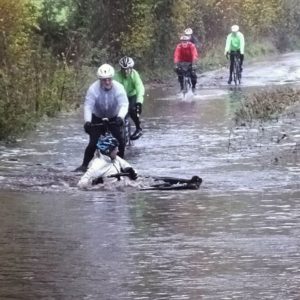 The route we avoided

We’d been notified of a diverted route to avoid a nearby road closure, but local intelligence was that a road on the new route was now flooded, so we followed the pack through Cranbrook – arriving minutes later at a deeply flooded road optimistically named Crannaford Lane. A high-seat recumbent and a couple of intrepid solos set off through the waves, but tandem bottom brackets are too precious to be drowned so we turned back with other like-minded riders to the revised route. A good choice, as one of the later forders took a bit of a swim, and apparently there were several more flooded sections to come.

As predicted, we soon came to another flooded road, but in this case providing a narrow raised pedestrian walkway. A slow stream of cyclists made their way along this wheeling or carrying their bikes – flood water one side, brambles the other, slippery boards with variable gaps between them underfoot. Every now and again someone’s tyre would stick in a gap and the whole line would stop and hold its collective breath.

Once back on the tarmac, we were able to make excellent progress on gentle gradients through Broadclyst and Silverton, and from there down to join the Exe valley road to Tiverton and on to Bampton. The rain never completely stopped, but was mostly light enough to be perfectly pleasant and we both felt well dressed and comfortable. We’ve ridden the Exe valley road many times in the past and it provides a steady climb with occasional swoops up and down where it pulls away from the river. We played tandem yo-yo with a few riders of similar average speed as we inevitably slowed on the steeper ups and took the benefit of the downs.

The control at the Bakery at Bampton was busy but well-organised and cheery. We had our cards stamped very professionally by a young lad and we both enjoyed a superb bread pudding while waiting for the espresso machine to catch up with our order. No worries about time, so we were happy to have the chance to chat to other riders and make the most of our day out. 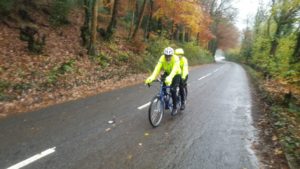 Leaving the warmth of the café gave us a smart jolt back to the ride, but luckily there was an early hill to warm us up and get the legs moving. The route now followed the River Batherm to Shillingford before turning East, to Waterrow. The road steepened as we left Waterrow, and we came upon Graham Brodie who had left the Bakery before us, but was taking photographs of riders on the hill. Graham’s wife Kate was poddling along ahead waiting for him to catch up, so we rode together for a while to have a chat.

The route continued on the B3227 which took us through Wiveliscombe and then again on fast tandem-friendly roads to the control at the Cross Keys at Norton Fitzwarren. The rain continued on and off, but my feet stayed fairly dry up to this point – that is until I stepped in a puddle in the pub car park. Thank goodness for merino socks. 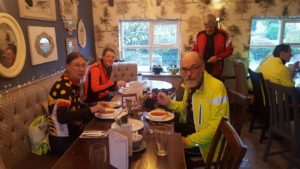 A lack of table manners at the control

The pub had laid on soup and bread for the Audax riders, serving us all together in a back room which was good for us and hopefully avoided frightening the normal clientele too much. Service was quick, but the butter was chilled, so being well trained to avoid unnecessary delay at controls I attempted to speed up proceedings by using the hot soup spoon to spread my bread. Needless to say, I was caught on camera.

Soup consumed, with or without etiquette, we were soon back on the bike and retracing our route a mile or two westward, then turning south to Wellington on quiet but sometimes muddy lanes. We were stopped briefly at one level crossing for the mainline train to pass, then again to pick up an info control at the next.

After leaving Wellington we were back in the lanes, on an increasingly undulating route through the villages of Culmstock, Craddock, Kentisbeare, Dulford and Talaton. Overall the day was brightening up, but there were still patches of heavier rain to catch us out. There were several stretches of standing water which we were mostly able to ride around or coast through level pedals, only having to actually pedal through water once on the whole ride. 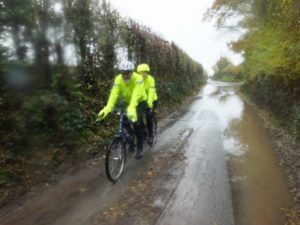 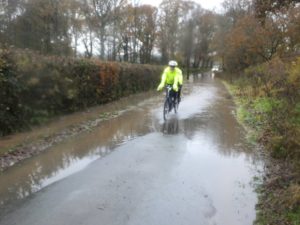 The hills were not particularly steep or long, but they were starting to feel relentless at this point in the ride and we were glad to top up the carbs with energy drink and a snack bar as we went. Finally, a turn through Whimple and back to the old A30 on the roman road past Jack in the Green and then into the Arrivée at the Cranberry Farm pub.

As on the Mad March event, we were given a warm welcome and a discount at the bar, which we were happy to put against a pint of Fursty Ferret and a portion of chips each. We were dampish, but comfortable enough to delay changing till after the short ride back into Cranbrook to reload the tandem into the car – our audacity and choice of clothing thoroughly vindicated.

A really lovely day out, lots of fun and camaraderie, which it would have been a shame to miss on account of a bit of rain and a flood or two. Many thanks to Sarah for organising, and to Graham Brodie for the photos.

This entry was posted in Ride Reports and tagged Breakfast in Bampton. Bookmark the permalink.