We are always pleased to include reports on the Audax Kernow events, or about local riders going further afield. 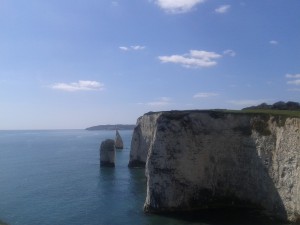 Isn’t that the sound of gunfire in the distance?  But it is 6 am on a Sunday in the sleepy Isle of Purbeck and it is the day of the Dorset Coast.  After a hearty breakfast (including black pudding) the four of us ride off to the start in Wareham.  Mark and Jane are in their Willesden CC strips and Robin and I in our Audax Kernow colours.  Mark is in his usual early season good shape (which is quite visible). END_OF_DOCUMENT_TOKEN_TO_BE_REPLACED

This may only be a very short audax randonnée, but this is the one event that riders really look forward to in early December every year.  It is a pleasant prelude to the season when the bike otherwise gets neglected and we put on some unwanted extra pounds.
END_OF_DOCUMENT_TOKEN_TO_BE_REPLACED 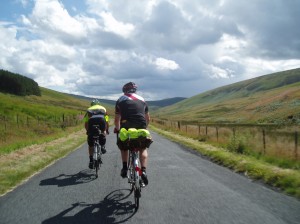 One dark winter’s night the idea was hatched.  I think a pint or two may have been involved. I said I wanted to ride the National Audax UK 400 at Tiverton and before we knew it five of us had signed up for the longest audax event there is, the London-Edinburgh-London, the LEL.  Were we mad?? 1420km (or 887 miles, and just a bit further than Lands End – John O’Groats) in less than five days.  We were mad! But it turned out that 1100 others were heading for the asylum too.

END_OF_DOCUMENT_TOKEN_TO_BE_REPLACED

Celtic Coastal – The view from behind 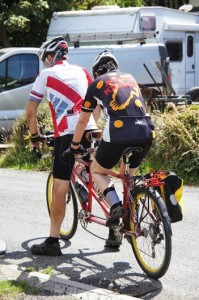 Our ride started early, with about 25K to put in to get to Connor Downs for 9 o’clock. We were pleased with progress after several weeks off the tandem and with the captain still in recovery from LEL, and arrived in good time for once to find the hall buzzing in anticipation of a good ride and a sunny day.

The long hill out of Connor Downs to the A30 crossing is reasonably tandem-friendly and all was going along very cheerily until what would normally be an easy front mech change turned into a nasty snarl up and a fight with a greasy chain. This, luckily, is men’s work – the Butlers stopped to lend a hand and eventually we were back in business and pushing hard to catch the field at the Coombe checkpoint. A bit of faffing here and a couple of poorly coordinated starts saw us off the back again, and we enjoyed most of the rest of the ride in glorious isolation and at a very modest pace. END_OF_DOCUMENT_TOKEN_TO_BE_REPLACED

Blasts from East then West

The opening events of 2013 from Penzance were notable for the very fresh and cold wind from the East. The two brave starters of the Many Rivers to Cross 300 called it a day at Camelford when it was clear that finishing in time was no longer a realistic hope. The Four Hundreds 200 next day was a more practical proposition with four finishers. I found the slog around West Penwith and especially from Lands End to St Buryan painfully slow but some rather fuzzy mental sums suggested I could finish in time and after catching up another rider who had lost me before Zennor, enjoyed the final run past Sheffield and down to the lights of Newlyn. 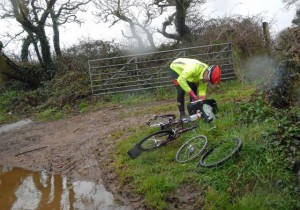 The Cornish Hundred from Falmouth took place under threat of Westerly gales with gusts of 48mph on the forecast. In fact it was windy but not that windy. Making use of the excellent cross-wind stability of my small wheels I made quite a brisk start. Thoughts of an early arrival at Long Rock were rewarded with a loud bang from my back tyre and I was able to review nearly the entire field as they passed me bent in a gateway fitting a new tyre and tube. Caught on camera too.

Things soon looked up with an end to the rain, some fun with the route sheet and the arrival of sunny spells and the pleasure of riding without the waterproofs. Falmouth Wheelers’ cake and savouries spread didn’t disappoint and I made the most of it.