Run every four years by the ACP (Audax Club Parisien), this 1200Km Randonee is the most prestigious event on the Audax calendar. Paris-Brest-Paris was originally a cycle race, and predates the Tour de France (which only started in 1903) by 12 years. From it’s roots as a race to it’s current format as Audax Randonee, it has become the ultimate ride for dedicated Randonneurs, with entrants coming from every corner of the globe to take part. I first heard of the event in a Cycling Plus article in late 1995, but had only seriously begun to contemplate entering this years event eighteen months ago. I had completed local randonees up to 200Km, and knew I was capable of greater distances, so this year I entered a full Audax Super Randonneur series (200, 300, 400 & 600Km events) with the intention of qualifying for PBP. 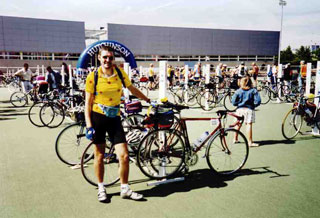 Don at the bike check

Once I had completed my qualifying SR series (including some tough events like the Poole Hard Boiled 300, the Welsh 400 and our very own Tour of Kernow 450 permanent), I booked a place on an organised trip to the PBP with Graham Baxter Sporting Tours, a company with prior experience of the event. This proved to be an excellent choice, as it threw me in with a large group of cyclists of varied experience, including many PBP first timers and a fair few 4 or 5 time veterans. Much useful advice was exchanged during warm up rides undertaken in the weekend leading up to the event, including a quick reconnoitre of the first 30Km of the route. The compulsory bike check was on Sunday – we had been warned that this was fairly thorough, and that at least 4 spare bulbs for front/rear lights would need to shown. A Sam Browne-type reflective belt or waistcoat is also required, though happily for forgetful types, these were on sale at the check. Having cleared this hurdle, I was allowed into the Gymnasium to collect my swipe card and Brevet book. The magnetic swipe cards are a brilliant idea – these are read by a terminal at each control and record the riders position on the French Minitel system. Relatives and friends can then access the system to find out how far you’ve progressed along the route.

Come the day (Monday 23rd August), I found myself in the company of 3000 or so other riders making up the under 90 hour group. A far smaller number had elected to complete the ride in under 84 hours, and these would start at 05:30am the following morning. The remaining riders made up the under 80 hour group known as “Vedettes” (very quick /very confident!) and these had two hours head start on the under 90 hour riders, to ensure their speedy passage through controls. My group started at 10:00pm, but we were divided into smaller groups of 600-700 riders, staggered at 15 minute intervals to lessen the risk of crashes. I found myself in the 10:15 group, having got to the start reasonably early. The extra time spent waiting to start is taken into account at the end, so no time is lost. At the appointed time, we were ushered onto the road outside the Gymnasium des droits de l’homme (the official start and finish) where we sat astride our bikes as camera flashes burst and pop music blared from the PA system (“I will survive” – ha!). For me, eighteen months of expectant waiting were over, and with the blast of an air horn, the adventure was under way.

The first stage to the feeding station at Mortagne Au Perche (141 Km) went by in an adrenalin-fuelled blur, as I jumped from group to group, following an endless trail of red lights down the long straight roads west of Paris. The first ‘proper’ control at which our Brevet books were stamped, and magnetic cards swiped was Villaines la Juhel (219Km) which we reached around 08:00 in morning. As the ride progressed, I grew to understand the nature of the phenomenon that is PBP – villages we passed through were lined with supporters, egging us on with cries of “bonne route” or “bonne courage”. It seemed that every village had their local hero taking part, but praise and encouragement were shared equally amongst all. Little children stretched out their hands to “gimme five”, a request I never refused, however tired I was feeling.

Throughout the day and night well-wishers kept vigil by the roadside with water and sometimes coffee and bread and jam for the tired and thirsty riders. The walls of the buildings used for controls were frequently covered in paintings commemorating PBP, by local schoolchildren. Queues for food at the first few controls were a little irksome, but this became less of a problem as riders settled into their own pace, and the field began to spread out. After Villaines la Juhel, the cool morning air soon gave way to the sweltering heat of a summers day. With only a helmet and suntan lotion to screen me from the suns rays, the outcome was predictable, and by the next control at Fougeres (305Km) at noon, I was feeling the effects of heatstroke. This caused me to spend more time at the control than I had intended, and by the time I had recovered sufficiently, it was after 3:00pm. 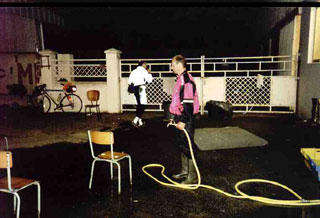 The showers at Loudeac – seriously!

The next two stages to Tinteniac (359Km) and Loudeac (444Km) sapped my depleted reserves of energy, and I was glad to find a bed available in the dormitory at Loudeac, in which to grab a few hours of much needed sleep. Later arrivals had to find any available space and rough it in their space blankets. I passed on the shower facilities (see pic), unlike some others who stripped down to the buff for an improvised hosepipe douche; totally oblivious to the entire population of Loudeac, who had turned out to enjoy the carnival atmosphere. Refreshed from a sleep and a hearty breakfast, I set off for Carhaix (520Km) at 4:00am. A few hours down the road, my journey was broken by a secret control at Corlay, one of two during the ride, with an early opening bar providing coffee and cakes. 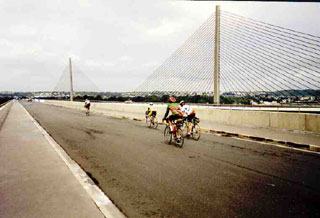 O’er the bridge to Brest

After a shower at Carhaix, and a change of kit, I continued on to the turn at Brest (603Km), reaching there at around 2:15pm on Wednesday. With a welcome tailwind on the return from Brest, I made it back to Carhaix at around 7:00pm, and pressed on to Loudeac, reaching there around eleven. Once again, I found a free bed to sleep in, and this time managed to get about 4 hours – bliss! After another mammoth breakfast, I left at about 6:00am, heading through the maze of lanes to Tinteniac. 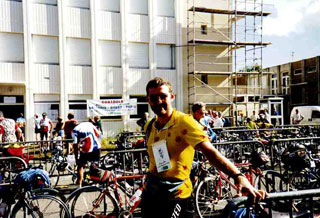 Tinteniac (on the way back – hence the smile!)

After the briefest of stops at Tinteniac and Fougeres, I arrived at Villaines La Juhel around 7:00pm in time for a slap up evening meal and the best leg and foot massage ever, courtesy of the French Red Cross! A prepaid postcard was also provided, to let loved ones know how you were getting on – a nice idea, as long as your hands weren’t too numb to hold a pen! Soothed by the massage and revitalised by the food, I pressed on to Mortagne Au Perche, reaching there, almost shattered, at about half past midnight. 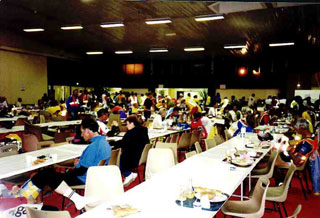 If it’s Thursday, this must be Mortagne au Perche!

A few hours shut-eye on one of the Graham Baxter buses restored me to the level of ‘barely functioning’ – by this time some ripe saddle sores were starting to cause me great pain. Forcing myself though the breakfast ritual one more time, I struck out for the penultimate control at Nogent le Roi, negotiating a dangerous downhill section covered in loose chippings that my tyres struggled to grip. On this stage I received a welcome boost (and a tow) from AUK Chairman, Rocco Richardson, and taking it in turns on the front against the brisk headwind, we time trialled our way into the control. Here I met Tim Wainwright, Deputy Editor of the AUK magazine ‘Arrivee’, and thanked him for his useful advice for PBP first timers published in the last few issues. I had followed many of his suggestions during the ride and survived (just). 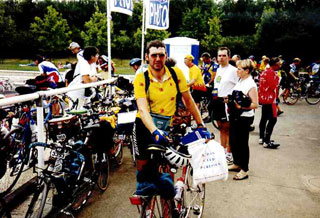 One of the hardest goody bags you’ll ever earn!

With only about 60Km to go, morale was high, and the pace picked up on the final run into the Gymnasium at St Quentin En Yvelines. A cobbled section of road reawakened my saddle sores, but I was past caring by this time… just about. The final few kilometres through the suburbs seemed to take forever, but suddenly the roundabout where I had started the ride three nights previously came into view, and huge crowds clapped and cheered us into the Arrivee. The atmosphere throughout was incredible, and the support provided by the ordinary people of the villages along the route, ever on hand with water and coffee or just a friendly greeting was magnificent. 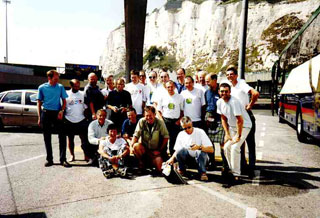 Would I do it any differently next time? I think i’d spend a lot less time queueing for food in the official controls, it’s definitely the key to a fast time. It was worth every bit of pain however, and I’ll do it all over again sometime (maybe…).

This entry was posted in Ride Reports and tagged Paris-Brest-Paris. Bookmark the permalink.