This may only be a very short audax randonnée, but this is the one event that riders really look forward to in early December every year.  It is a pleasant prelude to the season when the bike otherwise gets neglected and we put on some unwanted extra pounds.

The hall at Carharrack was bustling with good-humoured riders as they registered with organiser Eddie Angell (also as good-humoured as ever) for the fifth edition of the event. There was a good turnout from the Falmouth Wheelers and Trilogic clubs. There was plenty of hot tea and coffee on offer.

The weather has always played its part in this ride.  A few years ago the dangerously icy conditions led to the only cancellation of the event.  There have been hailstorms and 80mph winds.  But this year it was dry and almost warm.  The trees still had many of their leaves and conditions were nearly perfect.

Eddie sent off the 85 riders in groups and we were soon warming up on the hill through Vogue before dropping down into Redruth and wending our way on up to Carnkie.  On through the Great Flat Lode and up the short climb at Condurrow, and before long thoughts  were turning to what delights Wendy might have in store for us at her farm near Helston. 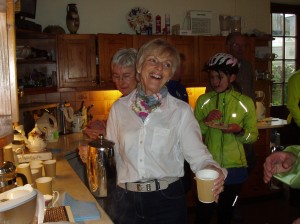 Wendy Wallis’ kitchen has become an iconic symbol of this ride.  Not only do she and her husband welcome 80 plus of us into their home, often when we are dripping in water and mud, she also puts on such a spread of cakes and cream scones, and this year even pasties, that it becomes difficult to get up from a cosy chair by the AGA and get going again.  But reluctantly we do so.  Somehow the 20km ride back to the finish always seems very leisurely, at least for a while as we climb up the long hill past Truthall.

At Black Rock we paused to regroup and then the thought of those hot mince pies and mulled wine began to draw us on, faster and faster along the ridge, and down the long descent through Lanner to the finish.  They rounded off one of the rather special Cornish audax rides.  Proper job, Eddie and team!