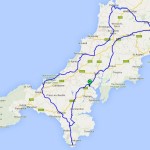 Under one of the lesser known rules of AUK, an event organizer and helpers involved on the day are entitled to ride a calendar event in the two weeks before the date of the event itself.  Thus it was that we set off yesterday to route check the Lizard and the Camel, and hopefully have a good day out in the May sunshine.

We have previously ridden one 200 on the tandem – the London-Oxford-London Steam ride in 2014 – and I found it a mixed experience. I was anxious at the start and probably worked too hard to keep up speed, spent a good portion of the second half of the ride with stomach cramps after an ill-chosen sandwich at Oxford, and got weepy when we went wrong on the route. However, I felt better prepared for this adventure – we’ve been riding all winter and spring with the Falmouth Wheelers, gradually building up the distance, and we have a new and lighter tandem (and have pared some weight off the crew too). The early ideas for this route came out of finding tandem-friendly DIY Audaxes, so I knew we could cope with the terrain. And the weather was perfect.

As this is to be a validated event, we start at Devoran early with a photo outside the village hall. I remind myself I need to think of the route one control at a time and “enjoy the ride”. To begin, a trip down the Lizard, a local run out we’ve done many times before. First though, we have to take the route to Stithians, and a minor diversion to the 100km Cove and Cliff route adds some distance and an extra hill. After a quick check that the info control is still in place and a photo to prove it we have a relaxed ride down to Lizard Village where we buy and demolish a packet of Jaffa cakes and collect our proof of passage receipts. We leave Lizard Village having built up just half an hour in hand, but it’s early days yet.

With a tail wind helping the run back up to Helston is fast and we manage to keep up momentum on most of the hills. The climb out of Helston is an unpleasant grovel, but we are soon bowling along again, and after the turn to Copperhouse the gradually building height gives us some outstanding long views and our first sight of the Towans. A long descent, a short rise, and we are bumping down the road to the beach. The control distance here is 73km, so the first third of the ride is complete. 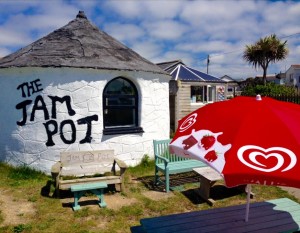 The faster pace has given us nearly an hour and a half in hand, which is just as well as we need to eat before the next section. I enjoy a toasted cheese and tomato sandwich and my share of a large pot of tea at The Jam Pot while taking in the spectacular views and chatting with coast path walkers. We leave with about forty minutes in hand.

This section is a third of the ride and I’m expecting it to feel much harder. There are some hills to come, and I’ll be stretching into distances and areas outside our regular range. We start with some well-known territory, though, as we move on through Gwithian and gain the North Cliffs, then run through Portreath and take the Cambrose climb. We’ve previously ridden this part of the route while checking out the Cove and Cliff  and I’m glad to turn off after Elm Farm and leave the Porthtowan rollercoaster to the 100km riders. We on the other hand have a flat stretch on the old tram route heading for Devoran. Then we turn for Mawla – oh well.

Once past the Mawla nip it’s keep-it-rolling country again then as we head on familiar roads to Mithian. We work together to keep up a steady pace, and I get an unpleasant reminder of my cheese sandwich – what is going into the legs isn’t going to the digestive system. A slow nibble on a sweet bar puts things right again in time for a bit of lane diving down to Rose-in-Vale and up the other side. We carry on down the Perrancombe valley alongside the stream in the sunshine – one my favourite roads. We now have to negotiate the horrendous climb from Bolingey. This one is tough on the tandem as it is very steep from a standing start – tricky to co-ordinate bike control – and goes on forever. It does however have the courtesy to gradually ease rather than steepening, and Martyn reminds me that it’s the worst climb on the route. I close my eyes and settle in.

St Newlyn East is one of my mental divisions on the route, for many years marking for me the end of the known universe and on more than one occasion providing great relief in the form of emergency rations and a comfort stop. This time it seems to appear sooner than I expect and I suggest we push on to St Columb. We carefully check off the instructions and the road priorities through the maze of the village, continuing on through rural lanes to St Columb via White Cross and Trebudannon. We make our entrance via the Sustrans gap in the hedge and Trekenning Road, and join the main road through.

The Co-op is conveniently placed on the route, with toilets and a bench nearby. We are pleased to see the shop is now open 7-11 all week, so our Sunday riders will have this refuel option too. We both have a chocolate Frijj and a banana, and we top up the water and make up another bottle of Torq energy drink. At 125km this feels like an important milestone – we’re more than half the way round the ride, with just 15km to go to Padstow. My brain is free running and it doesn’t seem long before we have reached the A389 and are making our descent – the sun is still shining and the views down to the Camel quite spectacular.

Padstow may sometimes be overrated and overcrowded, but arriving today at about half past four it seems perfect – lively and picturesque, and with plenty of eateries open for business. We have fish pie and mushy peas at Walkers, and take a cola and flapjack for later. We defy the seagulls and sit outside overlooking the harbour, admiring the seamanship of a single-handed sailor and chatting to other visitors. Then it’s time to leave, and we find a seagull has hit back and left its mark on the bike – Walkers’ staff to the rescue with a cloth and water. We’re now at 140km, and leaving with 45 minutes in hand after nearly 9 hours on the road. This would be a good long touring day for us, but we’ve a way to go before bed today.

When planning this ride, we thought we might lose time on the trail section, but in the event it turns out to be fast and easy. The lower section to Wadebridge has been tarmacked and dressed to road standard (better than some of the lanes, in fact) and we are able to make road speeds with minimal effort. At this time in the evening the trail is virtually empty and we only have to slow for other trail users once or twice, otherwise keeping up a steady push.

The upper section is not quite so uniform, and there are two gated roads to negotiate, but it is still very ridable at a good pace. We reach Bodmin only an hour after leaving Padstow. The climb through the town reminds me how many miles are in the legs, though, and I’m not sorry to stop at the station to pick up some info control details and catch my breath.

As we leave Bodmin and make for Lanhydrock I’m now mentally on the home straight, aiming for roads that are ideal for the tandem and we’ve ridden many times. I’m also aware we are now moving past the 100 mile point and into distances I’ve only done once or twice before. First there is a bit of new territory for me – a short tarmac Sustrans route through the woods and across the A30 on the bridge I’ve observed from the car but never ridden. It is utterly beautiful in the low evening light.

This takes us neatly to the Lanhydrock “shelf road”, the mildly undulating section that parallels the A30 emerging just above Lanivet. We pick up the old A30 – no time triallers here now and no time trialling from us either, as we continue across Goss Moor. The time passes, the pedals turn, discomforts come and go. We have a couple of unsynchronised hedge stops and eat through our remaining pocket food – it feels like dropping a small can of petrol into a large booming empty tank. I start fantasising about the remaining emergency flapjack but it’s too awkward to share on the move and we don’t want to stop again. I remind my body it can burn fat and I’ve still enough of that.

Once through Indian Queens and Fraddon we can head down the Laddock valley. Usually we have a lot of fun here pushing our top gear and maybe even towing a pace line. Today we are happy to drop 10kph and use the “tandem advantage” of weight over air resistance to help us on. There is still plenty of exhilaration in getting a move on and it seems to provide some refreshment to the legs, if not to the brain which is now in free fall.

Finally, the climb from Tresillian, a fast descent into Truro, and the cut up to Lemon Street. We stop a last time and share the cola (though I still can’t get my hands on the flapjack), which fuels us on the final push back to Devoran in the fading light.

Another photo and a time check – we have completed the event with 1hr and 40 minutes in hand, which funnily enough is about the same as we achieved on the Steam Ride. This was much more fun, though.

Thanks to the Captain for the route and conning the bike.

This entry was posted in Completed Events 2016, Devoran May 2016, Ride Reports and tagged Brevet de Randonneur, Lizard and the Camel. Bookmark the permalink.